The Bandon Playhouse production, “A Bandon Christmas Carol,” opens at the Sprague Community Theater on Friday, Dec. 6 with weekend shows through Dec. 15, 2019. The script is a new adaptation of the Dickens classic written by Neal Davis. Mike Dempsey directs the Playhouse cast.

The play celebrates an ongoing nostalgia for the work of Victorian novelist Charles Dickens in a contemporary comedy with heartfelt moments and plenty of humor. 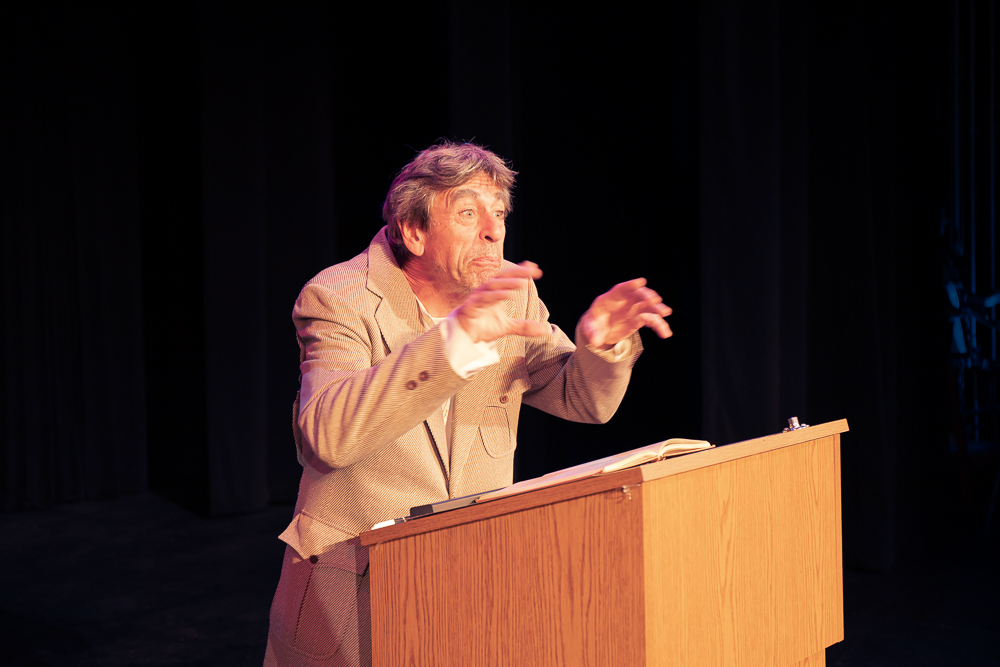 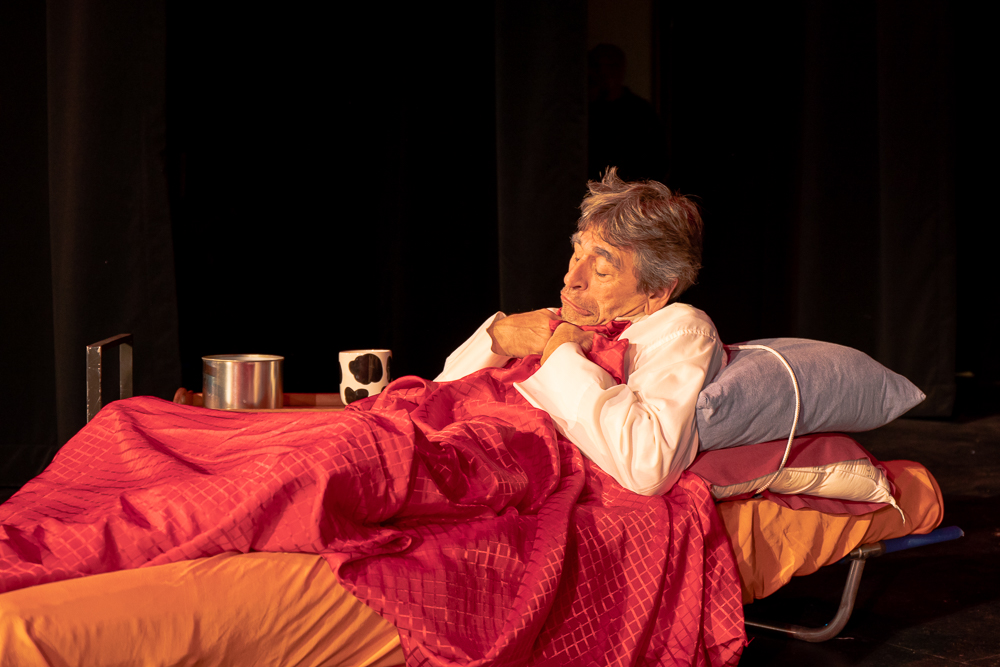 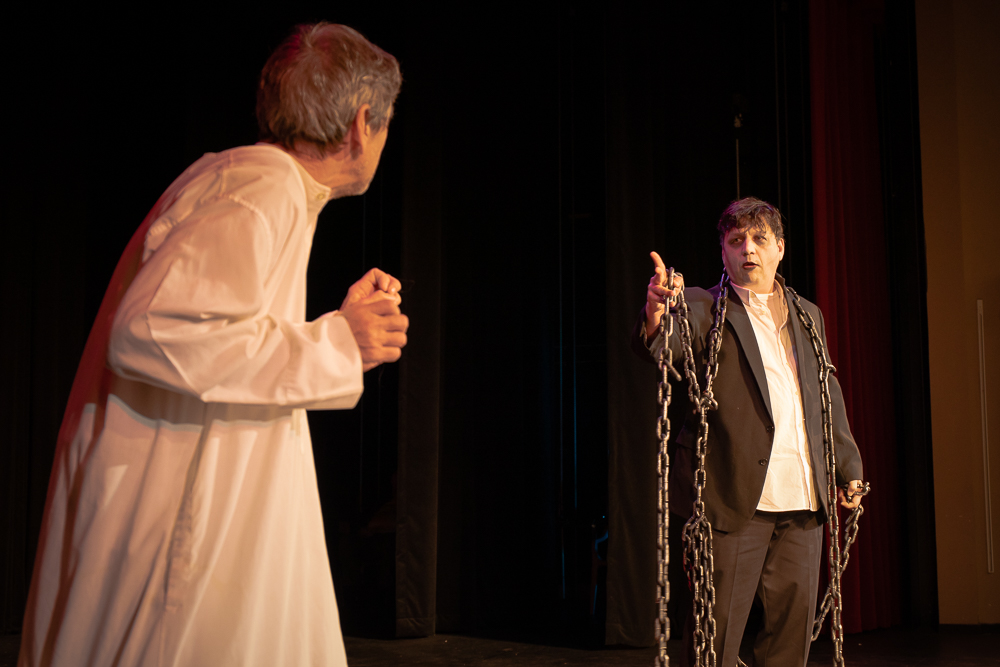 “A Christmas Carol” was published in England in 1843 as an illustrated novella. Today, it’s one of Dickens’ best-known tales. Through the years, the holiday ghost story has been republished, adapted for movie scripts, stage plays and ballet.

“A Bandon Christmas Carol” follows Dickens’ original narrative: Ebenezer Scrooge is a miserly, self-centered gentleman who confronts his shortcomings in a series of ghostly visits. First is the ghost of his late friend and business partner, Jacob Marley, then the spirits of Christmas Past, Present and Future.

After reflecting on his past and present– and glimpsing a possible future– Scrooge rediscovers this own capacity for kindness and sharing. 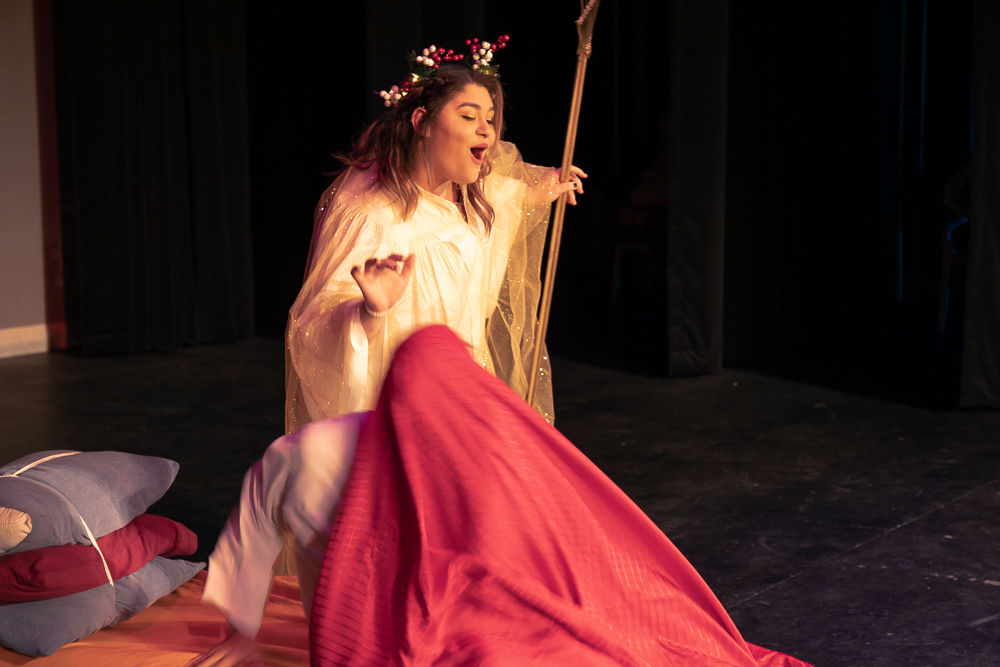 Neal Davis and Mike Dempsey have performed or worked behind the scenes at the Sprague Community Theater on projects for Bandon Playhouse, Gaels Readers Theater, Bandon Feeds the Hungry, and others. And, “A Bandon Christmas Carol” isn’t their first writer/director collaboration.

“Helen and Anne: Through Their Eyes,” was commissioned by the Bandon Lions Club in 2010. The play honors Helen Keller and Anne Sullivan, women who overcame visual and hearing impairments and became two of the most inspiring communicators in American history. Davis adapted the play from biographical texts, Dempsey directed the two-woman show, and Ruthanne McSurdy-Wong provided artistic direction and set design.

The dramatic comedy “Bethlehem Road” follows a modern-day family on a fantastic trip back in time to the first Christmas. It was Davis’ first holiday-themed script. The 2007 debut was presented by the Bandon Playhouse, (directed by Sally Ford), and the play enjoyed a reprise in 2015 with Dempsey as director.

Here, Davis and Dempsey answer questions about writing and directing a new play for Bandon audiences.

Q: Why do the Dickens story and characters still appeal to audiences– more than 150 years after its debut?

Davis: Dickens knew we all love a good redemption story. It’s a universal theme that transcends time and culture. That it occurs over three stages of life – childhood, the present, and the unknown future, allows us to discover new truths each time we experience it. The story I saw as a kid is different than how I see it today. Plus, for me personally, the fact that it’s royalty-free, (the novella is in the public domain), was a tremendous lure.

Dempsey: It’s got the key elements – suspense, family, loss, hope, redemption. These appeal to modern audiences just as much as when the story was created.

Q: What literary or historic discoveries did you make while writing the script and preparing to direct the play?

Davis: Writing this was easy and not. Dickens’ template is near perfect, but adapting it wasn’t as idiot-proof as I’d hoped. Finding the right tone and language took a little time, as did balancing the humor to drama. Since this was for all ages, I also wanted a sound and look to the piece that would appeal to everyone in the audience. With our great cast and crew, I think we’ve succeeded in making a fun and meaningful experience.

Dempsey: Dickens really knew how to tell a human story. That we could transfer it to modern day, and with loads of literary license, yet still keep the tale’s spirit and heart, shows how brilliant his creation is.

Q: Community theater productions by Bandon Playhouse draw cast members of all ages and levels of performance experience. What can you tell us about writing for and directing this cast?

Davis: The script had to be adaptable to a variety of skill levels. We got a Christmas miracle with our principal casting. Scrooge is played by Nameer El-Kadi, who brings over 30 years of stage and screen experience to the role. Others are local stage vets, from Heather Bouher, David Wyatt, Gareth Williams and Annie Giardinelli from Bandon; and Dave Elst from Coos Bay; to newcomers to the Bandon Playhouse. Their dedication is amazing.

Dempsey: This is one of the hardest working casts I’ve ever worked with. They’re eager, they learn, and they seem to be having the time of their lives. Nameer is one of the best – he lifts everyone’s performance and puts his whole heart into becoming Ebenezer Scrooge. His performance is one you’ll remember. That’s true of many of our performers – they’re having fun, and it shows.

Q: The title of this adaptation is “A Bandon Christmas Carol.” What elements, in the script or staging, are unique to Bandon, Oregon?

Davis: The scenery is all Bandon, as are a few of the situations. You won’t hear your street name or business, but you’ll definitely know it’s Bandon.

Dempsey: We’re in modern day Bandon, from Old Town to the cranberry bogs. We’re harvesting, partying, and working hard as a community. And the main character is a real crab.

More about the Show

Looking forward to the play? Browse the Bandon Events calendar for dates, times and ticket info.

The play is approximately 1 hour and 20 minutes, presented without intermission. It’s suitable for audiences of all ages. 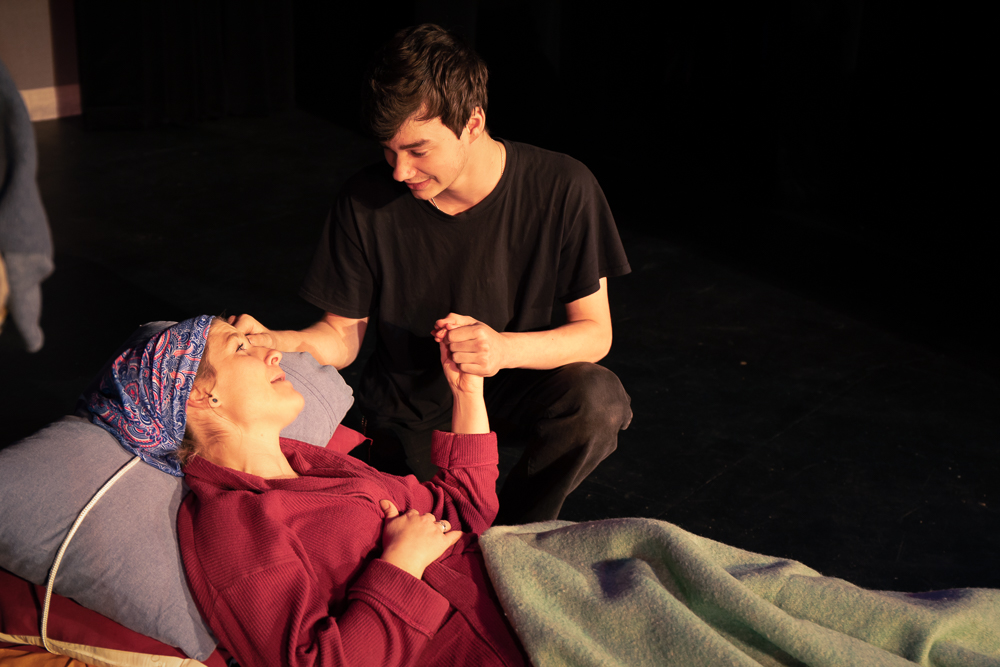 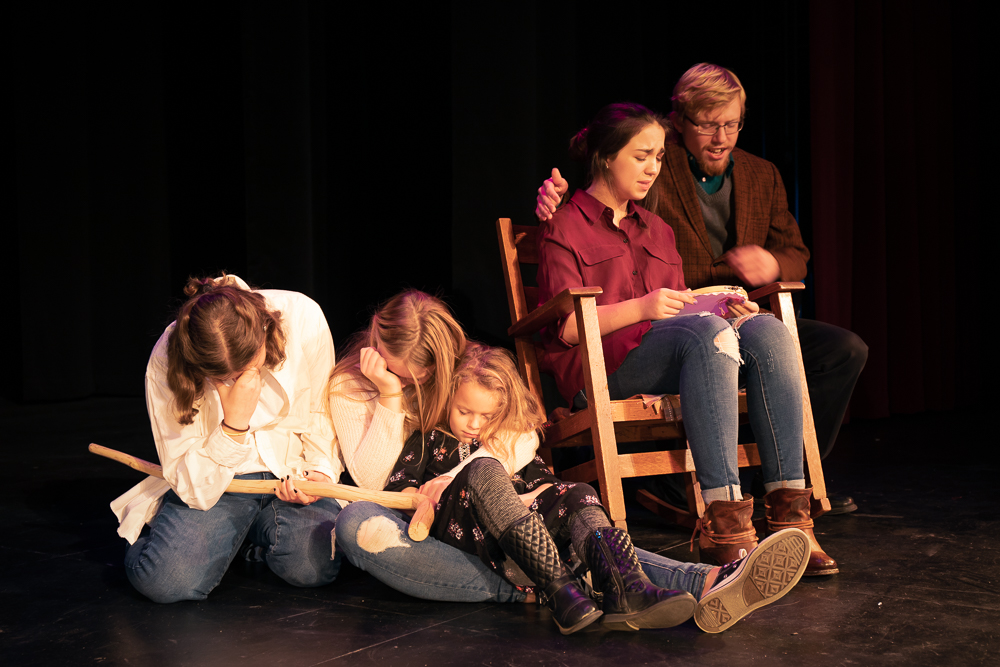 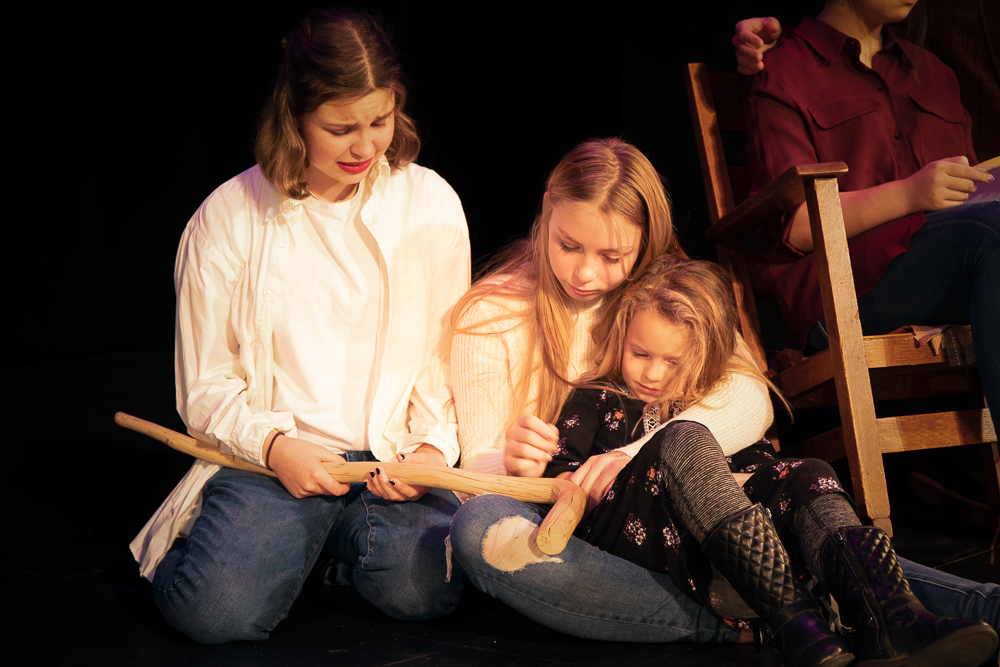 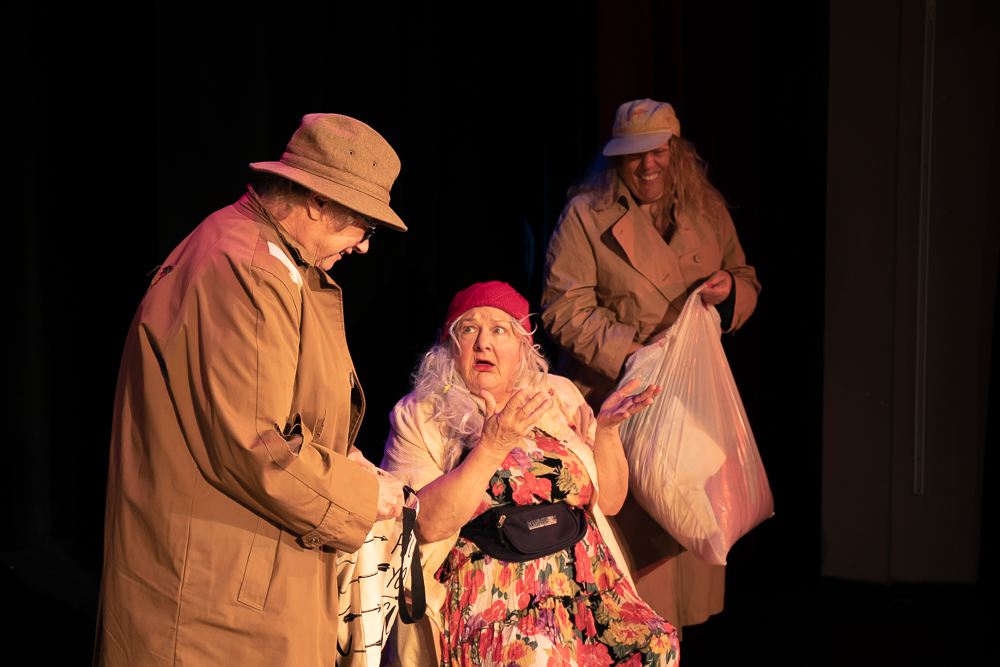 Article and photos by Geneva Miller.