Works for cello and piano by Beethoven, Schumann, Rachmaninoff and Chopin

The concert at 2:00 p.m. at the Sprague Community Theater in Bandon. Admission is by donation at the door. Pay what you can– all are welcome.

Listeners will hear the shifting balance between the instruments, as Scarfe and Akert showcase a variety of classical, romantic, and contemporary examples of duos written for two virtuoso performers. With each composer, and each era, different musical ideals are highlighted: the explosive energy and rapid-fire piano writing of the young Beethoven, the lyrical melodies of Frederic Chopin, the lush harmonic world and famous Russian cello sound of Sergei Rachmaninoff, and the rustic folk song influence in Robert Schumann.

The program will feature Ludwig van Beethoven’s first published duet, the Sonata for Cello and Piano Op. 5, No. 1. Written in 1796, while the young Beethoven was visiting the royal court in Berlin, the piece was intended to draw attention to his dramatic flair as a composer and his virtuosic playing as a pianist. He was kind enough to also give a few good tunes to the cello– the King of Prussia was after all a cellist himself! What emerges is a masterpiece of Beethoven’s early life, a duo that balances the driving force of the piano with the operatic role of the cello.

In music from the later 1800s, the balance shifts, as the cello seizes the spotlight with long melodies, and the piano moves to a role creating lush harmonies and serene atmospheres. Works by Chopin and Rachmaninoff highlight this change. Both the character of the music and the relationship of the instruments. 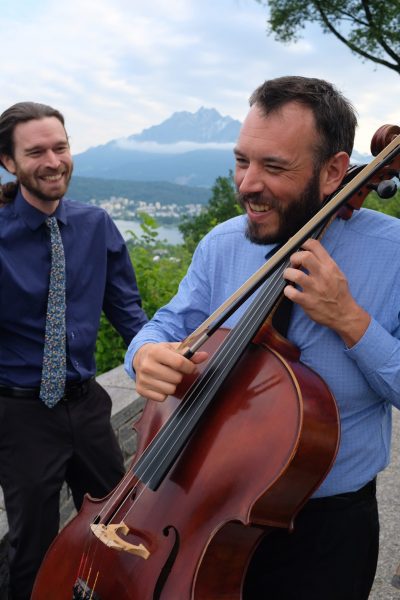 Scarfe and Akert have performed together for over twelve years, first joining forces at the Zephyr Chamber Music Festival in Courmayeur, Italy. They have performed across the United States, Canada, and Europe, and are two-thirds of the Swiss-American ensemble, the Zurich Beethoven Trio.

In addition to a lengthy performance history, the duo is known for its entertaining and educational storytelling during performances. Audiences can expect a “behind the scenes” experience, with Scarfe and Akert sharing the stories that illuminate the history of the composers, the context of their music, and specific examples that serve as a listening guide for the performance.

Charles Akert has been described as “a performer with great sensitivity to the music, and an understated virtuosity,” by Toronto arts publication “Ludwig Van.”

After completing degrees at the University of Northern Colorado and the San Francisco Conservatory of Music, Akert was awarded residencies at the Banff Centre, the Aspen Music Festival, and Carnegie Mellon University. In 2011, he won first prize at the Plowman Nation Chamber Music competition as a member of the Nexus String Quartet. His performances have ranged widely: from Carnegie Hall to NPR’s Tiny Desk Concerts. He is a regular guest artist and core member of the Trinity Alps Chamber Music Festival in California.

Ian Scarfe enjoys a wide ranging career as an advocate for music. He is the founder and director of the Trinity Alps Chamber Music Festival. Started in 2011, this organization offers residencies for musicians and composers in the beautiful Trinity Alps region of Northern California, as well as dozens of annual free concerts serving those same rural communities.

He is currently on staff as a music associate at the San Francisco Conservatory of Music, where he earned a Master’s Degree in 2008 and an Artist’s Certificate in 2010. He has served as faculty and guest artist at the Fairbanks Summer Arts Festival in Alaska, the Astoria Music Festival in Oregon, and the Telluride Chamber Music Festival in Colorado.